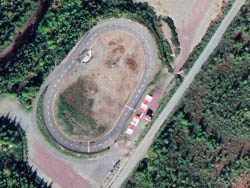 Construction began on Thunder Valley Speedway in early 2006, and by September the hand-paved quarter-mile was ready to make history as Newfoundland's first paved race track. The first official event was held on June 2nd, 2007, when a handful of spectators watched five Sportsman cars put on a show in nearly below-freezing temperatures. 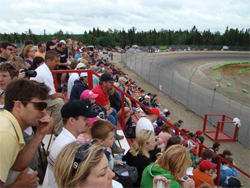 In 2008, sections of the track were widened, and pit lane was paved. Further safety measures were put into place such as concrete barriers and fences, and proper draining was installed to prevent the track from becoming a pond during the springtime. By July, a motocross track had been built in the infield, and motocross events were held between qualifiers and feature races.

The track's official grand opening was held on July 26th, and saw 1,100 spectators walk through the gates. The final feature race ended at sundown, with the track being lit by a mixture of portable lights and fireworks.

Permanent lighting was put into place for the 2009 season, and the majority of races took place at night. Compared with 2008, average spectator attendance quadrupled. Several more sponsors came on board as well, bringing with them funds that helped further improve the facility. By mid-season, the growth of interest was evident, when at a single event 21 Stock cars and 14 Sportsman cars were present. 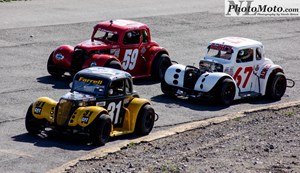 The track was purchased by an entrepreneur group called AME Enterprises in 2012, opening up enormous opportunity for local race fans and drivers alike. In anticipation, extra seating was constructed and numerous improvements were made. Two extra classes were added to the roster, the officially-sanctioned Legend Cars and Bandolero series', which proved to be very popular additions. 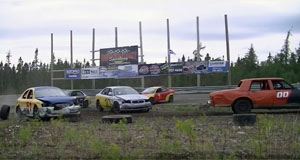 Returning to semi-independent operation in 2016, another type of racing ran its inaugural season at TVS: flagpole racing. Changes were made to the infield to accommodate for the new series, and we saw new entries from all over the province. The track hosted several races for the first-ever provincial racing championship, and groundwork was laid for an even more exciting future of auto racing on the Island.